Scaffolding Through the Ages

In this article, we share Part One of the history of scaffolding. We go back to the beginning to show you how scaffolding started and its evolution during history.

Scaffolding played an important role in ancient civilisations including Egypt, China and Rome. Whether these scaffolds were built of bamboo or timber beams, they were used to build some of the wonders of the world including pyramids and Great Wall of China.

From the time that Adam was a boy, man has wanted to reach great heights and devised ways to get there. Historians and archaeologists have varying views on how this was achieved, but it is safe to say that the scaffolding evolved from elementary structures into the high tech standards and materials we use today.

Before delving into what may or may not have been the first scaffold, we need to describe what qualifies as a scaffold. The following description is courtesy of Dictionary.com

In plain speak; it is a platform or deck to stand or sit on while accessing an area safely to perform some form of work. That work could have been an ancient carving, painting, laying stones, or even repair work. The structure or scaffold was capable of spanning over uneven ground or objects to create a level platform. At the same time, it can support loose items such as tools, sand, rocks and bricks. It is also important to note that scaffolding is a temporary structure.

The oldest structures, which are not necessarily buildings but structures like monuments, statues or even mausoleums, must have required scaffolding in some form.

When our knuckles dragged on the ground

Scaffolding was not always erected from the ground up. For example, if the surface that needed to be accessed was sloping. This may have required sockets such as holes to be placed in the wall. This enabled the user to stay close to the work face. Timber beams or poles could be anchored in these sockets and protrude horizontally to form a cantilever. Then other timbers could be spanned over them to form a working platform or deck. There is evidence to suggest that this type of scaffolding was used 17,000 years ago to paint the ceilings of the ‘paleolithic’ caves at Lascaux, France. According to research, this is claimed to be the oldest use of scaffolding. 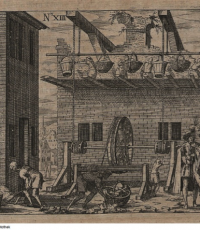 It is believed that the ancient Egyptians used scaffold and a form of ramps to construct the ancient Egyptian pyramids over 4,500 years ago. This is not scaffolding as we now know it. It qualifies as one purely on the basis that it supported materials and possibly men. It was also temporary.

“At first, it (the pyramid) was built with steps, like a staircase….The stones intended for use in constructing the pyramids were lifted by means of a short wooden scaffold. In this way they were raised from the earth to the first step of the staircase; there they were laid on another scaffold, by means of which they were raised to the second step. Lifting devices were provided for each step, in case these devices were not light enough to be easily moved upward from step to step once the stone had been removed from them. I have been told that both methods were used, and so I mention them both here. The finishing-off was begun at the top, and continued downward to the lowest level.”

When Romans ruled the world

The Romans were renowned for constructing temples, aqueducts, monuments, amphitheatres. The photo below shows a wall being constructed using scaffolding. This drawing was recovered from the tomb of Trebius Justus in Rome. This scaffold appears to be free standing, but a combination of methods may have been used. As previously discussed, sockets were sometimes created by leaving a stone/masonry brick out of the wall to allow a beam to be anchored. Once the height of the wall above the socket was sufficient to act as a counterweight, the supports (standards) could be removed thus creating a cantilever. They would often, as a method of saving timber, cantilever the beam so the wall being constructed could be accessed from both sides. This was happening around 300 AD.

With the use of Roman Concrete (mortar), believed to be in use in 150 BC, the Romans refined construction from the older Greek methods. Arches were part of Roman Architecture, and these buildings required scaffolding and would have been made of timber. The Romans were not solely famous for building the Colosseum, They constructed the famous three level Pont du Gard which still stands today (photo below). It was part of the 50km long aqueduct that supplied water to Nimes in southern France. It was constructed using limestone and is over 50 metres high and 300 metres long. When you think of the ancient dynasties of China, the first thing that springs to mind is the Great Wall of China. It is believed that the early walls commenced in the 7th century BC. A number of Dynasties were responsible for various sections. The current wall extends for thousands of kilometres in various forms.

To construct such a spectacular over mountainous terrain would have required scaffolding. It is believed that bamboo scaffolding was used. It may have been from the ground up or possibly with use of the previously mentioned sockets. We know that bamboo is used extensively for scaffolding in Hong Kong. In fact, it was used in the construction industry in the 1800s. In Part One of this article, we explored the earliest forms of scaffolding. All the great civilisations of the world have built their monuments and structures with different types of scaffolding.

Get a Quote Today

GET A QUOTE FOR YOUR PROJECT TODAY.

There is no project too big or too small.